Featured on the French online magazine 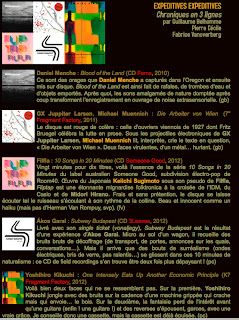 My latest C26 cassette tape "One Intensely Eats Up Another Economic Principle" released on Fragment Factory, is featured on the French online magazine "le son du grisli". On the same section, there are really great releases of Daniel Menche, GX Juppiter Larsen/Muennich (this 7" is also released Fragment Factory ), and one of most talented Japanese musicians Keiichi Sugimoto's Filfra. Filfla has very sensitive and beautiful sound layers with beats. So to be featured my music with his on the same section is surprising but really nice for me. That's simply great, the editor did cool, though the description about my tape is totally bizarre. The reviewer should listen the sound with reading text by me carefully.

The review with strange words is the following:

My new solo exhibition started from September 1st at AISHO MIURA ARTS in Shibuya/Tokyo. It will have been held for a month, until September 30th.
The title is "Nullized Layers Inside The Institutional Coverups 1".
I show you the diagram of my thought about the title.
The large "INSTITUTE" and "LANGUAGE" are indicated as general idea I think. They the abstractions are defined each other, it means the one can't exist without another. LANGUAGE makes INSTITUTION and INSTITUTION enlarge the LANGUAGE functions. The small typed "languages" and "institutions" mean individual languages and institutions that are in largest classes written with large letters. Besides, coverups mean zillion hidden matters in the individual 'concrete' languages = institutions. And 'Nullize' means attempts to take the meaning/values off from original contexts to deconstruct the individual institutions and finally the largest INSTITUTION through the attempts posteriori.
I set the my these thoughts as an above (see photo) mathematical formula briefly.
And I wrote a statement for this time exhibition.

The statement is:
In recent years, I have defined my creative activities as deconstruction of various coverup matters which are inside INSTITUTION , in other words reason = phenomena threatening public order that are ensured by LANGUAGE activities (for instance, erotic behaviors and violent desires) and with observing de-mean-ization elicited from it, will explore the limit and possibilities of dismantlement of our reasonable order (which means, to predicate the both sides of the limitation -between reasonable and unreasonable fields-) and attempt in stages to slip new values into the structure in multilayer, which value has deprived.In this exhibition, as the previous step of these attempts, to predicate the value of languages, I will observe denial functions of the adjacent or opponent intellections with criterial arbitrary denotation (segment of languages and its value and display) in a new series of works of “Painted Negativity” which I employed a format of painting as one of a method.

I have an one more great news. My new art book under the title the same title that is above formula (it's not able to write here...) has been published on an independent publisher called Tycoon Books.
You can see and purchase it on here the TYCOON BOOKS website. The displayed title "no-title" is simply for convenience for the same reason.
I don't have the photos of the book, but it's amazingly well designed! 42 color pages with special cover that is folded large poster printed with silver ink! The cover has the English text I wrote on the second surface.
I signed and numbered all copies of first edition of 150.

Got a new review

The one of my latest cassette tape releases got a new (it's far nicer than the last one...) review, on the blog called "Dead Formats".

There are huge amount of reviews of multi-audio formats - cassette tapes, vinyls, CDs, DVDs, and VHS. The reviewer writes  brief but precise reviews. And the reviewer says that he(she?) would buy or not at last of the reviews. I found he runs small label "Dead Accents" in Seattle. Looks very nice label. I guess he says that he would buy or not from his perspective as a label owner. Concerning my tape "One Intensely Another Economic Principle", he says YES! Also he says the number of edition of 66 is not enough! Really great to read it! SO NICE!!! He says my tape has worth to be listened by more people!

Here are the scanned pictures of the 2 cassette tape I mentioned last post. 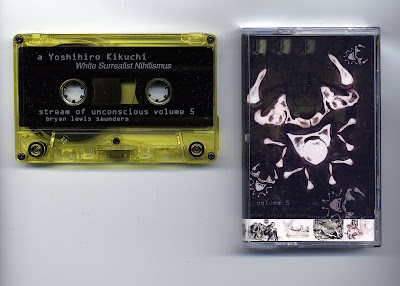 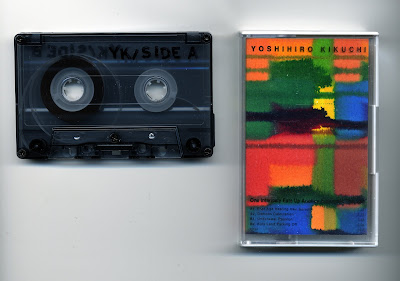 This tape got a strange review on Vital Weekly 823. The reviewer wrote self-considered observation about the concept I set and how I made, referred my liner note inside the sleeve. It's really strange text that is referring computer science including numerical matters like bit calculations, philosophy, and music criticism's boundary? They the topics are a bit deviated. Again, it's strange, but simply interesting in a viewpoint of like watching concrete poetry. So, we can also decipher it into like "dadaistic" letters construction.

"Kikuchi’s recordings were made in response to glitches and errors in software on an Apple computer in reading or converting between audio stored in .WAV format and .AIFF format, the two being (almost) the standard audio file format for Microsoft and Apple respectively. Kikuchi doesn’t say which software or precisely the actual details of the files, for both formats can store sound in various sample rates and formats. Details of these are found in the files (header) from which software can detect the number of channels, sample rate and sample size. This is a labyrinthine world of technical and so techie delight, but one with both philosophy, metaphysics, and surreal
humor. For instance a likely source of the error could be Apple’s changing its format from big-endian to little-endian. In simple terms which end of an address (here its data I know) is the most important. So yourname@hotmail.com is little-end (ian) because you are smaller than hotmail, or wonderfully child’s myname, my street, my town, my country, the world, the solar system , the galaxy the universe. Compare that to the Big endian 1,000,000 – where the 1 is Big, though wiki says that in big endian the first byte, lowest in address is the biggest, and gives Arabic numerals as an example, because I assume 1,000,000 is where we address memory 1,2,3,4,5,6,7, so 1 is in position 1, this is confusing because one might assume the end is position 7 and not 1. The article goes on to explain this has caused bugs!* And just before anyone goes completely insane, the terms little and big endian – wait for it- come from Gulliver’s travels where the two nations (Lilliput and Blefuscu) go to war over which end of the egg goes into the egg cup, the big end or little, or is it which end sticks up… I think I should get back to the review but with Kikuchi’s help I’ve established that the world of so called logic and computer science is far more otiose - ontologically (love it!) than anything those French post-modernists could dream up – well, maybe not, but certainly someone is giving someone a run for their money. *For my part rather than “think” I tend to try each end (when programming!) and listen to the result, see I’m an Englishman and at heart an empiricist, even if I try my hardest I cant go metaphysical for love or money. Perhaps the Japanese share the English sense of empiricism, Gulliver was you see written by an Irishman, as was Finnegan’s wake, though I’m enamored of Deleuze’s transcendental (or is it transcendent- :-) Ha! There’s a BIG difference ….. empiricism…. And so infinite virtualities… but empirically an audio sample (which is a two byte signed integer) say +303 would be stored as 2F 01, or 47 256 (2F is hex 2x16 + 15) or 0101111 00000001 which is 47 + 256 = 303. The 2F is the least significant byte, the 01 the most significant… in binary 1,2,4,8,16,32,64,128 in the first byte 256,512,1024… in the second byte, so 1 x 256 (from the second byte) + 32+8+4+2+1 = 47 (from the first) = 256 + 47 = 303 so empirically we know that if 303 is stored as 2F 01 then the system is using little endian. Obviously we need to know a priori that our number is 303, then the endian format becomes obvious or “visible”, tangible and no more a theoretic object. And this is no more irrelevant than a review of classical music which uses such terms as C sharp, as in “what does C sharp sound like?” – what does this cassette sound like, sounds like a possible endian conversion error in PCM data. And as such a review exceeds any subjective impression in giving an empirical fact, representation of the work, could then be criticized as, and this is true, saying nothing at all, but being a mere doubling, as if I am nothing more than a cassette recorder. Surly (even) any realist can see a mistake here? (jliat)"
投稿者 Yoshihiro Kikuchi 時刻: 12:45 AM No comments:

My new releases are available now in cassette tape format. I love the format because of the objective existence and the physical structure consists of plastic box and cassette with various colors and variable sleeves.

One is from the series called "Stream of Unconscious" of a conceptual artist Bryan Lewis Saunders. The series has been composed from total 24 musicians/sound makers' split 12 volumes of cassette tapes that has been made with Bryan's sleeping words. But please note that's not only just sleep talking. They have all concrete concepts and context. I think that's really amazing matter!
Mine has come out as Vol.5 split with Christopher Fleeger's "Revenge of the Dolphins". The title of my side is "White Surrealist Nihilismus". Each sides have 45 minutes = C90. I believe the 90 minutes time brings you the special listening experience! And the cassette have 21 page booklet of text. You can read what he says in the text.

Please visit his website and read his descriptions, besides the other participated artists.
BRYAN LEWIS SAUNDERS "SLEEP WORKS"

The another is released on Fragment Factory that is really important label for me. because this label releases my first solo in 2010. Though it's very small edition 50 copies, I'm proud the release. This time, the new solo release is as C26 with title "One Intensely Eats Up Another Economic Principle".
This cassette have unique artworks, I made the printed sheets for sleeves that have unique bleeding with my painting method without hands. And they are all signed. I think it's the evidence of no same sheets. It is finally available on the label in the edition of 66 copies. I signed them all in Friday of January 13. Let's add 6 to hail Satan... In addition, the sleeve is not only the signed sheets, it has transparent j-card printed title and my description about making process and some credit.

You can order on the label FRAGMENT FACTORY .
Click the 'Releases' and then click again [FRAG21]. I'm really satisfied this release with new trial in artworks.

By the way, I don't upload the both artwork images here at this moment because I don't want like to put the same images from others website anymore. After I received the copies, I will take photos and upload here. You can see them on the links now! Thank you for understanding!
投稿者 Yoshihiro Kikuchi 時刻: 6:34 PM No comments: